Courtesy of Marie Crowley who has so generously transcribed these.

WILLIAMS – At Cromwell, on February 16, 1907, fortified by the rites of the Holy Church. Sarah, relict of the late William Williams, in her 74th year. Native of Co. Clare, Ireland.

McNAMARA – On July 29, 1885 at the residence of her daughter Mrs John O’Regan at St. Bathans. Hanora McNamara of Scariff, Co. Clare, Ireland, mother of John and James McNamara of Swinburn, Maniototo, aged 81 years.

LENTALL – On Saturday, January 26, 1907 at Arrowtown. Mary, relict of the late William Lentall, fortified by the rites of the Holy Church, aged 64 years. A native of Co. Clare, Ireland.

O’GRADY – On August 2, 1906 at the Convent of the Good Shepard, Sunday’s Well, Cork, Ireland. In the twenty eight year of her religious profession. Sister Mary of St. Clestine, daughter of the late Michael O’Grady of Kilrush, Co. Clare, Ireland and sister of Mrs M. Bunbury, Bishop’s Read, Dunedin.

GILES – READY – On October 16, 1907 at St. Mary’s of the Angels by the Rev Fr. O’Shea, assisted by the Rev Fr’s Holley & Venning. William Herbert, second son of the late W. H. Giles and Annie Giles Petone, to Annie, youngest daughter of the late Bartholomew Reidy of Co. Clare, Ireland.

LONERGAN – July 3, 1937. The death has occurred of Mrs Mary Lonergan, aged almost 100 years. She was born and married in Co. Clare, Ireland and arrived in N.Z. on the ship ‘Hudson’ in 1873. Her home in Napier in the early pioneering days was well known. She leaves a family of five married daughters and two sons. Her husband predeceased her about twenty five years ago.

[* notice re passing at the end of this page.]

CLUNE – June 26, 1943. The death has occurred in Wellington of Mr Patrick Clune at the age of 99. Born in Co. Clare, Ireland Mr Clune spent some years in America before coming to N.Z. in the ship ‘Leicester’ in 1876. With the exception of a trip to Australia he had lived in Wellington ever since, being engaged in farming until the death of his wife in 1904. Mr Clune was a cousin of the late Archbishop Clune of Perth. He is survived by four daughters and one son. There are also 16 grandchildren and 20 great grandchildren.

McLOUGHLIN – FOSTER – On June 11, 1883 at the residence of the bride, Rimu by the Rev Fr. O’Hearn. John McLoughlin, son of the late John McLoughlin, Ashburton to Bridget Foster, oldest daughter of Thomas Foster, Co. Clare, Ireland.

SULLIVAN – VAUGHAN – On June 27, 1870 at the brides residence Mikonui Beach by the Rev J. A. Goutenoire. Lawrence Sullivan of Co. Limerick, Ireland to Margaret Vaughan of Co. Clare, Ireland.

McDONAGH – On December 29, 1909 at the Grey River hospital. Martin McDonagh, native of Co. Clare, Ireland and at one time a resident of North Town, aged 70 years.

SEXTON – At the Grey River Hospital on May 10, 1896. Michael Sexton, native of Co. Clare, Ireland and late of Nelson Creek, aged 58 years.

* notice re MRS. MARY LONERGAN as above.. 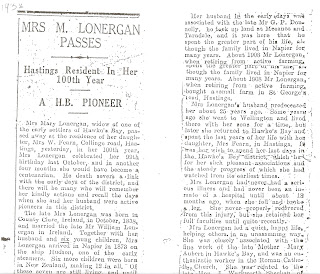