GO MAKE DISCIPLES OF ALL NATIONS

by John Bradley and Cora Mc Nulty
The stories of 170 women & men of Ennis who left home to go make Disciples of all Nations will be told and celebrated at the launch of a specially commissioned book compiled by John Bradley and Cora Mc Nulty and published by Ennis Parish in association with Clare Roots Society.  These men and women came from families in our parish who nurtured and still support the call to service which so many generously answered all over the world and here at home in Ireland.  The book is compiled to recognise and to acknowledge the men and women of Ennis who planted the seed, laid the foundations but who knew at all times that they were just workers, not master builders, Ministers not Messiahs. Ennis people has served as missionaries in the world's poorest countries, they have made an invaluable contribution to their adopted countries and left a legacy that others will harvest. On Thursday evening next at the 7.30pm Mass in the Cathedral celebrated by Bishop Fintan and concelebrated by many of our native sons, we will give thanks to God for the families that they were born into and the community of Ennis that reared and shaped them. After Mass the launch will take place in the Parish Centre and a welcome awaits all as we celebrate and salute the disciples who went to the end of the earth to proclaim the good news. 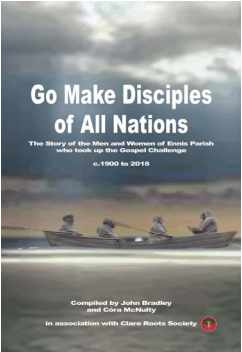 (Great Christmas Gift for Family or that Special Friend)

Posted by Crissouli at 22:31 No comments: Posted by Crissouli at 13:33 No comments:

THREE MEN FROM CLARE.. A book of their memories by Jackie Elger & Patricia Sheehan 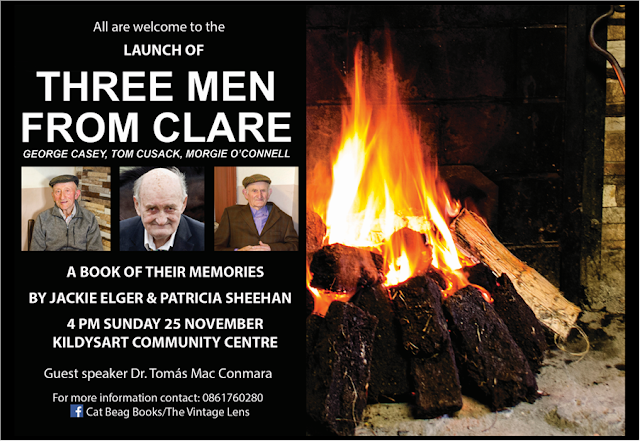 All are welcome to attend the book launch of 'Three Men from Clare,' an oral history book produced by Jackie Elger & Patricia Sheehan.
Special guests on the day will be George Casey (aged 94) and Morgie O'Connell (aged 93). Guest speaker will be the oral historian Dr. Tomás Mac Conmara.
About the book:
Over a period of seven years Jackie and Patricia recorded George Casey, Tom Cusack (RIP 2015) and Morgie O’Connell.
This is a book of the transcriptions of their recordings. The men recall their schooldays, farm work, dancing, socialising, sport,
local people and much more. The book is not only the story of their own lives, but also gives the history of a community and how
it has evolved and changed over the past century. It encompasses the villages of Kildysart, Cranny, Coolmeen, Ballynacally, Labasheeda and beyond.
The book will also be available from 26 November at The Ennis Bookshop, Kildysart Post Office, Eason in Shannon and online through the Facebook page, Cat Beag Books.

Posted by Crissouli at 07:12 No comments:

On that night we will launch 2 Books

Flan has finalised the recording of the next
section of the burials in Drumcliffe.
(County Council have agreed to name each section
for ease of identifying burials plots)

Posted by Crissouli at 10:18 No comments: 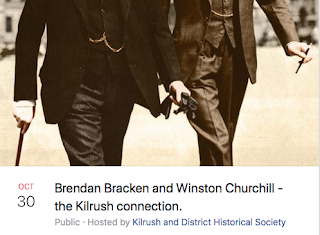 On Tuesday 30 October at 8.00 p.m. in Teach Cheoil, Kilrush, Brian Comerford will give a lecture on Brendan Bracken and Winston Churchill - the Kilrush connection. Brendan Bracken was born in Templemore, County Tipperary. His father, J.K. was the Fenian rebel sculptor who built the Maid of Eireann monument in Kilrush and was one of the seven founders of the GAA. J.K.'s son, Brendan, became so close to Winston Churchill that many believed he was Churchill's son. It was thanks to Brendan's intervention that Churchill became Prime Minister in 1940 and Bracken was appointed Minister for Information in Churchill's wartime cabinet. When he retired from politics, Bracken was appointed to the House of Lords as Viscount Bracken of Christchurch. Brian will detail Bracken's fascinating life story.
Since retirement, Brian has concentrated on acting and writing and has made brief appearances on stage and screen, including a cameo rôle in "Rebellion" (2016).
Brian has written award-winning short stories, stageplays and screenplays. A 3 part World War Two TV series, based on the 1943 rescue of Denmark's 8,000 Jews, is with a Los Angeles based producer at present.
KDHS lectures are free to members, EUR5 for non-members. New members are welcome. The annual membership fee (July-June) is EUR20.
Kilrush and District Historical Society
Posted by Crissouli at 21:53 No comments:

WEEK-END COMMEMORATION FOR CLARE VICTIMS OF THE RMS LEINSTER SINKING

Wednesday next the 10th October is the 100th anniversary of the sinking of the RMS Leinster and the tragic death of 567 people. Including 11 people with Clare, connections were amongst those that lost their lives in the greatest maritime tragedy in the Irish Sea. The tragic sinking of the Royal Mail Steamer Leinster by German torpedo just weeks before the end of the Great War was quickly forgotten. Contemporary newspapers had moved on to the next story within a week, and political and social changes in Ireland in the following years did not encourage discussion of Ireland's role in the war.

Next Sunday the 7th. October Clare Roots Society in conjunction with the Clare Peace Park Committee and Ennis Parish have organised a schedule of remembrance and memorial events commencing with a Mass of Remembrance celebrated by Bishop Fintan Monaghan at 11.30 a.m. at Ennis Cathedral. This is followed by a book launch at Ennis Parish Centre at 12.30. This booklet sets out the background and family details associated with John Coyne (Tuamgraney), Delia & Norah Davoren (Ennis), Nellie Hogan (Newmarket-on-Fergus & Brighton), James & Claire Hynes (Tulla & Manchester), Margaret & Mary O' Grady (Quin), Owen Ward R.I.C. (Ennis & Monaghan), Margaret Cooke (Ennis & Tipperary), Edwin George Ferber (Killaloe) all who lost their lives in the tragedy. Finally, at 1.30 p.m. a wreath-laying ceremony will take place at the Clare Peace Park at Glor.

On the morning of the 10th October, the Leinster steamed out of Kingstown port, somewhere about 9 a.m. with approximately 800 passengers and crew. Many of the 500 militaries aboard would have been en route back to the front; some of the civilians were going to see family members, wounded in France, in British hospitals; and many nurses were going back to work in English hospitals. It was a very beautiful morning, though the sea appeared a trifle choppy.
The mail boats, along with all other shipping in the Irish Sea, were targets of the German submarines but there was no alternative way of reaching Britain, except by sea. The first torpedo was spotted at 9.45 and, though it missed, the captain immediately commenced an evasive action to turn the ship around.
A contemporary newspaper reported the scene thus:
Within one hour and a half from the time she left Kingstown Pier, rumour had it that something had gone wrong with her. The Marine Road and pier soon began to fill with crowds on the tip-toe of expectation. Pedestrians lined the foot and carriageway. All eyes were sternly fixed on the horizon at sea.
Early in the afternoon, the curiosity of the many who lined paths and pier were quickly aroused, and more speedily still transformed into consternation by the sudden arrival of hundreds of military and civilian motor ambulances from Dublin. As the dead bodies of men, women and children were transferred from the rescue boats to the ambulances, the spectacle was appalling in the extreme. Some were horribly mangled, and death must have supervened instantaneously in multitudes of cases. It certainly required a stout heart to maintain composure while this weird dismemberment went on.
Horrid as was the scene at the landing stage, the Morgue in the hospital presented a still more awe-inspiring sight. The dead were placed in rows, on the floor, as a rule, but in many instances, they lay on the slab or on a table raised from the ground.
The return to Ennis of the dead bodies of Mss Norah and Dilly Davoren to the people who knew them in their youth, watched them grow up in the pride of life, was a sad event. In the nursing profession, they held a leading and respected place and this was more than borne out by the messages of sympathy received. Another extremely sad case was that of Mss Margaret & Mary O' Grady both of the nursing profession. Margaret's body was brought to Newmarket Church, and later buried in Quin Abbey; Mary's body was never recovered.
On this, the 100 years anniversary Clare Roots Society and author Lucille Ellis, together with the support of numerous people across Clare and beyond, have produced a timely reminder of this tragedy and its context.
The Author, Lucille Ellis was born and is living in Dublin but has two grandparents from Clare. Over twenty years of family history research have established that related families are still living in West Clare and East Clare on the same lands, since the late eighteenth and early nineteenth centuries respectively, with one branch having Ennis connections.
While teaching the senior classes in primary school, she was fortunate that the curriculum encouraged involvement in local history, in her case, the Dun Laoghaire/Dalkey area. When she retired she decided to combine the two interests of family and local history. Then with the backing and encouragement of the Clare Roots Society, she published 'Bindon Street and Bank Place', 'Ennis at Work in the 19th Century' & 'The Women of Clare'.
In the early 1970s, when she did her degree in History, researching primary sources wasn't the norm; now this is encouraged, even at primary school level. The past can really come alive to us now through old newspapers, photographs and maps, many of which can be accessed online or in places like the Clare Library Local Studies Centre which is a treasure trove of the past.
John Bradley
P.R.O.
Clare Roots Society

Thank you to Lucille Ellis, John Bradley and all who contributed to bring this memorial story to our attention.
May they who died Rest in Peace. 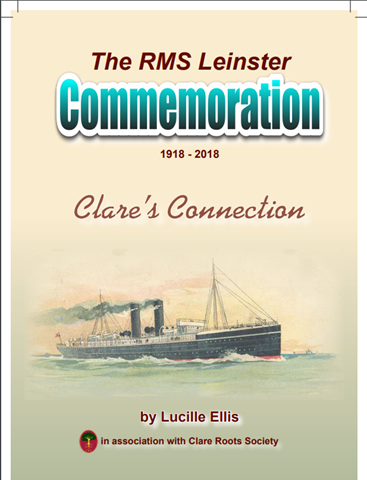 Cost for the booklet is €5 plus shipping cost. Orders can be placed with Ennis Book Shop. They have an on-line website books@ennisbookshop.ie for queries.

Thanks to all of you for helping with files for sharing to researchers.

Christina
http://www.igp-web.com/IGPArchives/
Posted by Crissouli at 08:50 No comments:

Posted by Crissouli at 15:05 No comments: