There is no excuse for not being able to discover the history of Ennis, County Clare
what with the numerous great publications being released by the
Clare Roots Society
and their many members who have a passion for history.

The most recent publications are to be launched next week...

YOU ARE INVITED...
by

Thursday Night the  26th  June at 8.00 p.m. in the Old Ground Hotel
to the double book launch
of

Both books will be launched by Councillor Mary Howard
who is representing the Mayor of Ennis Johnny Flynn. 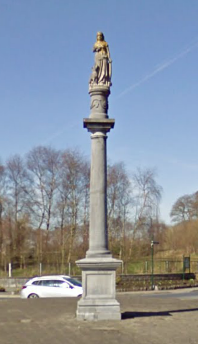 The Cusack Road / Claureen booklet covers the People, Buildings, and Roadway Features from the Maid of Erin Roundabout to the boundary of Claureen on the Lahinch Road. It commemorates the Manchester Martyrs,  Allen, Larkin & O’ Brien.

The Maid of Erin Monument was erected in 1881 and was moved on two subsequent occasions to its current location.

The area is unique in Ennis as it has 3 historical houses that have undergone little change since their construction, Ashfield House, Westbourne House, Claureen House.


The associated families and Bishops are identified and detailed.

The two Bridges associated with the area Claureen (built c. 1760) & Victoria Bridge (built c. 1840) are reviewed from their design to their construction.

The booklet also includes the history associated with Ennis Swimming Club at the Turrett
from 1856 to the construction of Ennis first permanent Swimming Pool in October 1969
until the current facilities were opened in September 2003.

Sporting legends Turlough Considine, Matt Nugent & Stephen McNamara had links to the area,  while public representatives Dan O’ Driscoll, Senators Derry & Tras Honan, Michael Howard and Mary Howard have all represented Ennis in their own way.
We learn about the history of the One Mill Inn from its foundation on the 26th June 1970 to its closure and subsequent sale.

During this time the Building & Lands were the home of a Squash Club, Pitch & Putt Club, and Hermitage Soccer Club.

Various Set Dancing groups are also featured. Various Circuses along with Marquee Dancing pitched their tent on the lands of the One Mile Inn.

The book is illustrated throughout with photos.
Mary Fealy Mc Mahon is the only daughter and youngest child of Jim & Mary Fealy Claureen Ennis.
Her school years were spent in the Holy Family & Coláiste Mhuire. After leaving school Mary mainly worked in sales.
She is married to Gerry McMahon and they have two grown up children, Oliver and Denise.
Mary first became interested in genealogy in the 1980's and has since been able to piece together a tapestry of her grandfather's life.
Genealogy is addictive, it can keep you sane or drive you insane. But it's a hobby which you can pick up any time
and just continue from where you left off no matter how many years it lays on a shelf or in the attic.
It was only natural that when Clare Roots Society was founded Mary and her husband Gerry were in attendance.
Mary reminds us that the lives of those mentioned in her book have loved, lost, laughed, wept,
but for you and me they live again in spirit inside our Family Tree.

GER BROWNE ,
a member of Clare Roots Society
will also launch his book
“THE ONE MILE INN SQUASH CLUB 1974-1991”.

Every club and every sport has a story to tell,
records need to be kept and published but far too many,
for whatever reason, never get around to putting it down on paper.
In the booklet

“A HISTORY OF THE ONE MILE INN SQUASH CLUB”

Ger Browne has brought many memories back to an area in 1980 when 21 courts and 14 squash clubs featured in the County for both men and women. The opening of the One Mile Club in 1974 lead to the development of other clubs across the county.

This book, running to 80 pages, recalls the formation of the club before going through year by year, and their various successes giving details of the many competitions promoted within the club. The book lists the various committees that served, the many teams that brought titles to the club and the team that won a Munster junior title in 1982.

There are many stories like the night a member argued that the ball had burst after he threw the ball into a packed balcony. Nobody bothered to check at the time, but when the crowd were leaving the balcony after the game the ball was found to be in perfect condition.

Posted by Crissouli at 09:42 No comments:

CLARE LIBRARY.. where would we be without it..

Irish researchers who are lucky enough to have Co Clare ancestry, have the most amazing and detailed resources at our fingertips... and we don't even have to leave home...
If you don't already, then I suggest you subscribe to the Clare County Library Blog... always full of so many great hints, news of new resources and definitely showing that libraries are about more than books.
Just take a look at this....
Clare Genmaps - new feature: distribution of monuments and townlands mapped


In Clare Genmaps, our online maps system, you can now select categories of monuments, and townlands grouped by their civil parishes, and see their distribution throughout County Clare. In the Features tab, click on the arrow beside Monuments and select one or more category of monument. The map will then show the distribution throughout County Clare of that monument type. You can then click on any monument to be brought to its dedicated web page. You can also combine categories by holding down the Ctrl button and select multiple monument types to see their combined distribution. 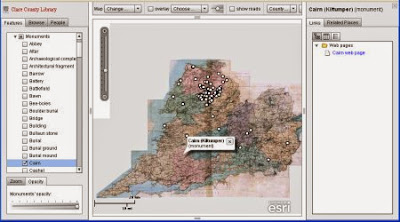 The image above shows the distribution of cairns in County Clare. Click on the image to be brought to the appropriate map.

The same procedure can be done for the Townlands by Civil Parishes. Select a parish and the map will show the distribution of townlands within that parish. Click on any of these townlands to be brought to each townland's dedicated web page.

To read more, please go to the  Clare County Library Blog
Posted by Crissouli at 08:59 No comments:

Courtesy of Marie Crowley... thank you.

Posted by Crissouli at 23:11 No comments:

PRIDE IN IRISH AT SOMME

PRIDE IN IRISH AT SOMME... Letters from Major Willie Redmond

To see the video, please go to

Rediscovered letters from the front from Major Willie Redmond reveal his pride in his fellow Irish soldiers and his frustration at not being allowed to fight alongside them.
Redmond, an MP for Clare and a brother of Irish Parliamentary Party leader John Redmond, was one of the most famous Irish casualties of the First World War.
He was killed during the first day of the Battle of Messines on June 7th, 1917. His death was the subject of widespread mourning in both Britain and Ireland.
Last December both the Taoiseach Enda Kenny and the British Prime Minister David Cameron visited his grave which is in the garden of a convent near Messines.
Redmond’s letters are in the Taylor/Monteagle collection which was launched last weekend at the Foynes Flying Boat museum in Co Clare. The Monteagles were an old Irish aristocratic family and the correspondence is to Liberal peer Lord Monteagle and his two nieces, London-based socialites Ida and Una Taylor.
The letters are sent from the front in 1916 when the 16th (Irish) Division were inFrance. On September 17th, 1916, Major Redmond wrote to Una Taylor expressing his admiration for his fellow Irish soldiers who had taken Guillemont and Ginchy during the latter stages of the Battle of the Somme.
“The Irish captured Guillemont and Ginchy in most glorious fashion,” he wrote. “Nothing could be more splendid. I saw enough of it though at headquarters to be lost in admiration at the bravery of these Irish soldiers and they never forgot Ireland but sang her songs all the time.
“Everyone agrees that the Irish troops could not have done better. The losses were of course comparatively heavy. So many dear young boys dead. I never regretted feeling old before. I wish I could have done more.”
Major Redmond was 52, overage and out of shape when war broke out in 1914. Nevertheless, he was determined to fight believing, like his brother, that joining the British war effort would hasten Home Rule and help reconcile Protestant and Catholics in Ireland.
Because of his age, he did not serve in the front lines in the first part of the war. Instead, he was based at army headquarters and was frustrated by not being closer to his men. In February 1916, he wrote to Una Taylor of the deprivations of the trenches. “It is a very strenuous life here and a great novelty for me I need hardly say. The men are awfully good and bear with all discomfort and hardships without a murmur.”
He finally got his wish to command the men in the 6th battalion of the Royal Irish Regiment during the Battle of Messines, but was hit immediately on going over the top and then fatally wounded after being shot in the leg.
The collection also includes a letter from Major Redmond to Una Taylor a week before the Battle of Messines asking her to pray for the Irish troops.

Posted by Crissouli at 23:05 No comments:

Posted by Crissouli at 10:28 No comments: