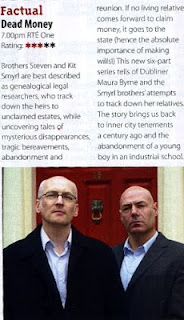 Posted by Crissouli at 10:31 No comments: 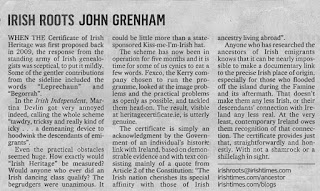 As always, please click on the image to enlarge it...
If you are interested in obtaining a Certificate of Irish Heritage, this site may help..
http://www.heritagecertificate.ie/
Posted by Crissouli at 13:40 No comments:

Patrick Gale talks about his new novel 'A Perfectly Good Man', which has its Irish launch at the Ennis Book Club Festival.
Readers' Festival

The Ennis Book Club Festival is a wonderful social and literary gathering bringing together book club members and readers from all over Ireland and beyond. Supported by Clare County Library, the festival includes author readings, discussions, workshops and walking tours through the narrow streets and lanes of Ennis. We offer sessions on running book clubs, advice on reading lists, poetry, events as Gaeilge, and an opportunity to compare notes and meet with other Book Club members.

Come and combine your love of reading with a great weekend away!

Posted by Crissouli at 23:46 No comments:

Irish family tree research societies and groups
Courtesy of Claire Santry, Irish Genealogy News
Feel free to add your favourites in the comments below.
Posted by Crissouli at 08:01 No comments:

Courtesy of Irish Genealogy News... follow on to read about some great changes re Roots Ireland.
Irish Genealogy News: WDYTYA? No place for Smoothies!: WDYTYA? kicked off yesterday morning in the way it always does: with a long queue of visitors stretching from Olympia almost all the way to ...
Blog by Claire Santry.
Posted by Crissouli at 07:49 No comments: 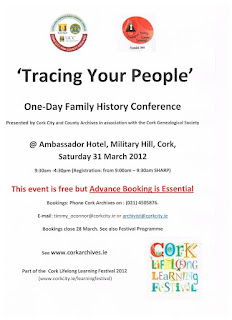 Please click on articles to enlarge...
Posted by Crissouli at 09:55 No comments:

"CSORP" looks like the name of an Eastern European secret police force. In fact, it is the acronym for one of the most under-appreciated Irish historical sources, the Chief Secretary's Office Registered Papers. The Chief Secretary, based in Dublin Castle, became the effective head of government in Ireland in the decades after the Act of Union in 1800. The registered papers are the records of all incoming correspondence to his Office, and cover the years 1818 to 1924. They comprise an extraordinary collection of documents: complaints, petitions, memoranda, accounts and reports on virtually every aspect of the administration of Ireland. And they have survived intact in the National Archives.

Until now, the only access routes to their contents have been via a partial card index in the Reading Room and the original annual CSO registers. The only widely known records were the many local petitions addressed to the Office, any one of which can list hundreds of names. Now a new website, csorp.nationalarchives.ie, aims to catalogue and calendar every single document in the collection between 1818 and 1852. For the moment only the first five years, 1818 to 1822, are complete, but already the vivid weirdness of 19th century Ireland is springing to life. One example: in 1821, a Dublin merchant, George Ness, proposed allowing the admission of Catholics to the Freedom of the City. As a result, he received an anonymous letter, which he forwarded to the Chief Secretary's Office. The letter threatens that, '…if I hear another word out of your head about Papists to be made freemen of any our corporations I will have you dragged from limb to limb and your head hung on the rapper of your halldoor..'. The letter is signed 'a fellow that wd shoot a papist, as soon sir as you wd a mad dog'.

Posted by Crissouli at 19:53 No comments: 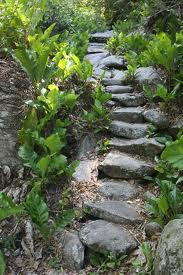 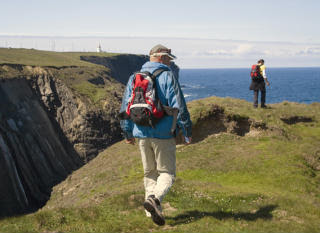 http://www.shannonregiontrails.ie/FindaTrail/Walking/LoopWalks/
Free Spring Walks Series around the County
Following on from the very successful Operation Transformation walk in Lissycasey recently, Clare Sports Partnership are teaming up with Clare's Rural Recreation Officer and Trails Animator as well as local community groups and walking clubs to organise a walk a month for the next 4 months.
The first of these walks will take place on Saturday February 25th on one of the many National looped walks in County Clare, this time in East Clare on the 7km Erina Bridge Looped Walk, in the lovely village of O' Briensbridge. The walk will start at 12 noon sharp and will be led by Clare Sports Partnership along with members of the O'Briens Bridge community.  Brian Goggin, Waterways Historian, will also give a short talk at the Capstan and The Anchor - two important waterway's artifacts which are located side by side at the start of the Erina Bridge /Green Loop.
John Sweeney, co-ordinator of the Clare Sports Partnership said:
"We are delighted to be highlighting and promoting this walk as part of our Spring Walk Series in a very unique and historically rich area alongside the Erina canal in the Eastern part of the county.  Clare Spring Water have kindly come on board and are providing free water for walker. We are grateful to the Clare Trails Programme, especially Eimear Mc Carthy the Rural Recreation Officer for her input and work on this project. Walking is a great way to get active and to stay healthy. We are trying to promote the idea that all it takes is 30 minutes a day of moderate physical activity to maintain a healthy lifestyle."
The development and maintenance of a total of 4 looped walks in the area is a credit to the O'Briensbridge community group. The group has also recently developed a Heritage guide for the area, which will be available to walkers on the day. And to support the February walk even further the local O' Briensbridge community group is teaming up with Bonners local pub to provide tea/coffee and sandwiches to hungry walkers after the event. The village also has a lovely new playground, so this could be a lovely day out for all the family.
Eimer McCarthy, Rural Recreation Officer said:
"We are hoping that the free guided walk, complimentary refreshments and playground in this lovely village set on the canal, will attract people from the town of Ennis, Limerick, and from O' Briensbridge and the surrounding villages, and encourage people to realize and explore the many fantastic outdoor recreation options all around County Clare".
The walk forms part of the Shannon Region Trails selection of looped walks in the County, and the Spring Walks Series are supported by Clare Trails Steering Group. There are several looped walks, long distance waymarked ways and Sli na Slainte routes in the county, and they can be accessed free of charge, with maps and details of all walks downloadable from www.shannonregiontrails.ie
The Erina Bridge looped walk is suitable for all the family, and is accessible for sturdy buggies. The walk is not accessible for wheelchairs. Please wear good strong walking shoes, as sections of paths can be wet at this time of year. Wear warm clothes and bring waterproof gear. For further information, please call Catherine on  065 6865434 or see www.claresportspartnership.ie for more details and to download a map of the route. This initiative has received funding from the Irish Sports Council.
Further details..

Experience a journey through time on our Guided Walking Tours through the winding streets of medieval Ennis! Hear tales of famine and poverty, rebellions and riots and learn about the mythology and legends of the town.

Courtesy of Fiona and Clara

from the Kerry list:
If you had ancestors living in North Kerry this is a web site worth checking
out - www.northkerryreachingout.com   great old photos and stories.

Posted by Crissouli at 19:55 No comments:

Clare Library has a range of books available free to download
Full details on this site
http://www.clarelibrary.ie/eolas/online_resources/digital_books.htm

Posted by Crissouli at 13:10 No comments: