A new booklet, written by Ger Browne, though already available,
will be officially launched at the
ENNIS BOOK CLUB FESTIVAL
March 9, 2014

So many names and places listed here, a great resource for family historians as well as a wonderful memorial for those lost. 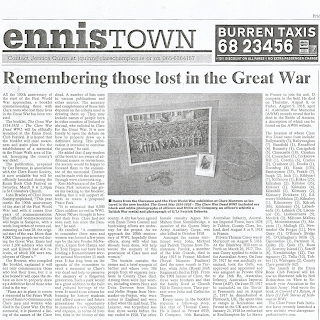 Posted by Crissouli at 08:57 No comments: 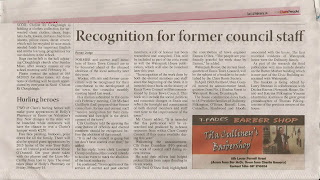 Have you ever wandered past Waterpark House in Ennis, Co Clare and wondered about it's history? Well, very soon, you will need to wonder no more.

This is being edited by Larry Brennan in collaboration with Declan Barron of Newpark House and the Australian great, great granddaughter of Thomas Pilkington, Katrina Pilkington Vincent.

Thomas Pilkington was one of the previous owners of Waterpark House.

All details of publication and dates will be published here as soon as they are available.

You can read an earlier post on Waterpark House at 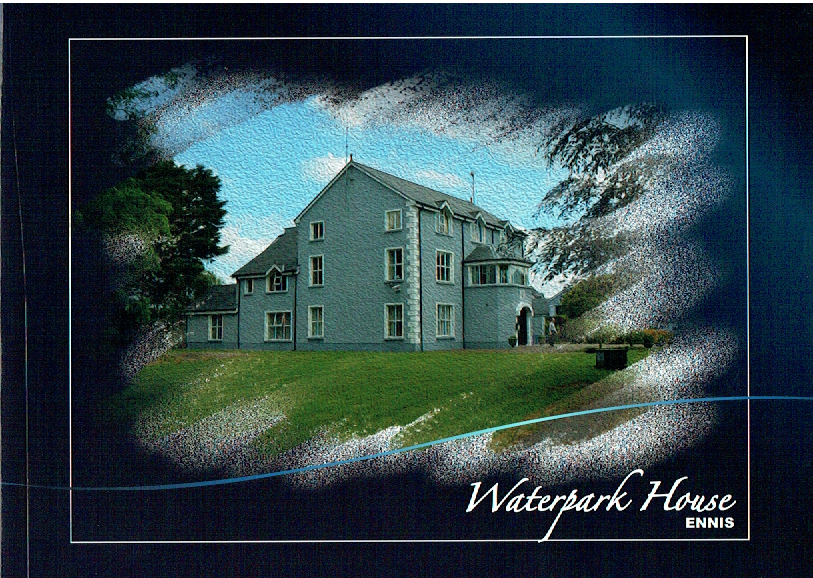 Posted by Crissouli at 02:12 No comments:


Learn all about townlands, electoral divisions, dispensary districts, poor law unions, civil parishes,
ecclesiastical parishes, dioceses,
baronies, counties and other administrative divisions;
how to find the boundaries of these divisions on maps;
and how to work out under which division you will find birth, baptism, marriage, death,
census, land and other records for your ancestors.


This will be a most beneficial talk for people tracing their family history.


The meeting will take place at the Civic Rooms, Ennis Town Council,
Drumbiggle Rd.  At 8pm Thursday 20th Feb. ADMISSION - €5.00 to Non- Members.
There will be a link available afterwards
to hear an audio recording of the talk.
Written version also.
Link below..
Posted by Crissouli at 07:07 No comments:

Apologies to those on my Followers List who can't see the list... I have reported this to Blogger a number of times now, and still nothing happens.

Your loyalty is much appreciated and I can only hope that the list is soon restored. I think it must be hiding along with Pageviews... That too, has disappeared, but only from this blog, not from my others.

So, if you should see a wondering list
that cannot find it's way...
Please grab it tight, and send it home
I'd rather it would stay! 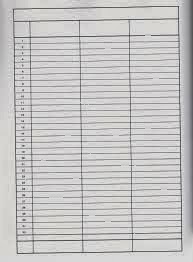 Posted by Crissouli at 14:19 No comments:

Administrative Divisions And Genealogical Records
Clare Roots Society February Lecture on Genealogy Records will be given by
Mr. Paddy Waldron.
Former Chairman of the Council of Irish Genealogical Organisations,
and chairman of Clare Roots Society.
Learn all about townlands, electoral divisions, dispensary districts,
poor law unions, civil parishes, ecclesiastical parishes, dioceses, baronies,
counties and other administrative divisions;
how to find the boundaries of these divisions on maps;
and how to work out under which division you will find birth, baptism, marriage, death,
census, land and other records for your ancestors.
This will be a most beneficial talk for people tracing their family history.
The meeting will take place at the Civic Rooms,
Ennis Town Council, Drumbiggle Rd.
8pm Thursday 20th Feb.
ADMISSION - €5.00 to Non- Members.

John Bradley
Posted by Crissouli at 23:11 No comments:

JIMMY STILL BEHIND THE KILLALOE COUNTER 50 YEARS ON

Jimmy still behind the counter 50 years on

RETIREMENT is still not an option for 78-year-old Killaloe shopkeeper Jimmy Whelan, despite reaching 50 years in local retailing on Friday. 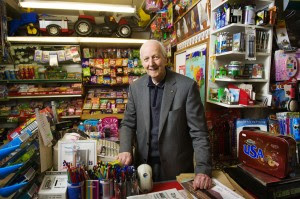 Jimmy Whelan, of Whelan's shop in Killaloe, is celebrating 50 years in the retail business. Photograph by John Kelly

Jimmy still loves meeting his loyal customers in Whelan's Foodstore at the bottom of Main Street, Killaloe, as much as he did when he opened a small shop in Church Street in January 1964.

Then aged 27, he rented this building, which included the shop, a small kitchen and two bedrooms at a cost of £2 weekly.
Jimmy never envisaged he would transform the old Kincora Dance Hall into a thriving business, while he was playing the button accordion with the Jimmy Whelan Dance Band at this venue from 1964 to 1970.

His current premises, which is located nearby, became renowned as a popular entertainment venue during the construction of the Shannon Scheme in Ardnacrusha and throughout the '30s.

Two West Clare brothers opened a supermarket there in 1970 but were forced to shut down following a fire a few weeks later.
Identifying an opportunity to develop a new business at a prime location in the shadow of Killaloe Cathedral, Jimmy bought the charred shell and developed a general grocery and toy business, as well as a residence for years, following extensive renovations.

He set up home at Hill Road but subsequently purchased an old doctor's residence, Abbey View on Convent Hill, where he currently resides.
After taking out a considerable bank loan, he was working almost 14 hours a day, seven days a week in an effort to establish his new business and keep up loan repayments.

Now entering his sixth decade in the retailing industry, the former musician is still as keen as ever to maintain the business.

"Retiring never crossed my mind. I am reducing my hours but I still work seven days a week. Self-employed people tend to keep going.

"I love meeting the people every day. I would be bored sitting at home. I come over here [home] to make a cup of tea at about 5pm and after a short while, I would be getting itchy feet to go back again. It's my life.

"I will stay going as long as God gives me good health. People expect me to be there in the shop. People tell me 'I was in the shop yesterday and you weren't there'," he says.

A non-drinker and non-smoker, he enjoys good health and goes for a walk most days. Jimmy and his late wife, Eileen, started off with a small shop. She worked as a general assistant in the Lakeside Hotel and had the benefit of meeting and dealing with people on a regular basis, which was a big advantage starting out with a new business.

His current working day starts at about 10.30am and extends until 9pm at night, with two and a half hours of a lunch break and two hours of a tea break, seven days a week.

He said customers became more "cagey" about purchases in 2008 and would often handle an item twice before making their decision.

He expects the celebrations marking the 1,000-year anniversary of Brian Boru in the twin communities should result in an increase in the number of tourists attending the locality this year.

"The scenery in Killaloe is second to none. We have Lough Derg on our doorstep. The 13-arch bridge is a popular tourist attraction. There is friendly rivalry between Killaloe and Ballina when Clare and Tipperary are in action. However, for club games, Killaloe people support Ballina GAA and vice versa. When it comes to business or community activities, there is no real divide between the two," he explains.

Over the last five decades, he has survived the competition from large supermarkets and shopping centres, despite the fact that a lot of people travel to Limerick City for their shopping.

He recalls self-service was the most dramatic new addition that changed retailing completely. Previously, he remembers stacking items high on shelves to try and store as much as possible in a small shop.

However, he acknowledges that even he had to respond to the main selling maxim, "eye level is buy level".

Pride of place in his shop is Jimmy's kitchen clock, which has been there since the retail outlet first opened. Jimmy couldn't afford to take a day off on Sunday, which was usually his busiest day, because other shops closed and an influx of day trippers regularly made the short trip from Limerick to Killaloe to enjoy local amenities.

A break at the time was taking an afternoon off for a trip to meet his wife's family in Lusmagh near Banagher in South Offaly.

To read the rest of the story, please go to....
http://www.clarechampion.ie/jimmy-still-behind-the-counter-50-years-on/
Posted by Crissouli at 09:45 No comments:

'A HISTORICAL TOUR OF CLONRUSH GRAVEYARD'

" I was recently sent a copy of a booklet 'A Historical Tour of Clonrush Graveyard'
given by Alfie O' Brien in association with Whitegate Community Council launched as part of Heritage Week 2013.
The 50 page booklet is a follow on from Alfie's tour of the graveyard where he tells the background to 31 burials within the graveyard.

I recommend if they want a copy to write to:
Whitegate Community Council,
Whitegate,
County Clare,
Ireland.
Enclose €10.00"

There is a great website, courtesy of Alfie O'Brien... you will be amazed  at this.. do hover over the graveyard map as suggested.

Tom McDowell also did an inventory of the Clonrush graveyard.
It's published with photos of the individual gravestones at
http://www.clarelibrary.ie/eolas/coclare/genealogy/don_tran/graves/clonrush_graveyard_whitegate.htm 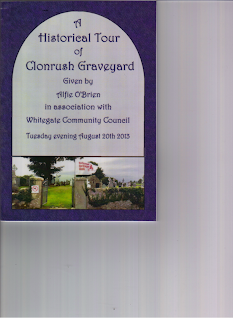 Posted by Crissouli at 08:37 No comments: 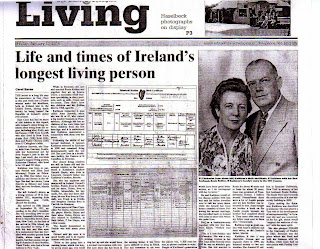 Click on image to enlarge and clear...
Posted by Crissouli at 07:54 No comments: 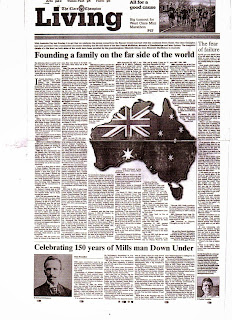 Posted by Crissouli at 07:51 No comments:


The friends of the late Mr. Thomas Drew, of Ennistymon, and Miss Daly of the
same place, will regret to learn of the death of Mrs. Henry Daly, whose
remains were interred in the Melbourne general cemetery lately on June the
funeral being numerously attended by leading residents and brother officers
of Mr. Daly. .................. wreaths .... one from Mr. A. O'Loughlin,
Cleck of the Ennistymon Union, and one from Mrs. Freehill, Sydney, wife of
the Spanish Consul, and daughter of the late Dr. Tim Molony, who was a
fellow student of Mrs. Daly's. Mrs. Daly left her father's home for
Australia in 1852, and was married in 1856 to Mr. Henry Daly, son of Mr.
Francis Daly, of Ennistymon, and grandson of the late Mr. Francis Daly, of
Ennis, who was at one time a leading solicitor in Clare. Mr. Daly not many
years ago was promoted from the rank of District-Inspector of Police to that
of Superintendant, the highest rank in the service, and placed in charge of
Gippaland, but he is now retired, and we understand that he intends shortly visiting his native
country, and scenes of his youth.

Thanks to Jackie C. who transcribed these inscriptions from Victorian Records...

Posted by Crissouli at 08:39 No comments: