The Globe and Mail,  Toronto

Born in Ennistymon, County Clare, Republic of Ireland on September 7, 1951, passed away on Friday, January 4th, 2013 at the age of 61, surrounded by family and friends. He was the beloved husband of Madeleine, the loving father of Treasa and Rory, and the adored son-in-law of Eleanor Treacy. He is survived by his 4 siblings Cathal, Ursula, Donogh and Roddy.
Eamonn O'Loghlin was larger than life, with a personality to match, which virtually filled any room he walked in to. His generosity to his fellow countrymen and women knew no bounds, as he helped hundreds of young people land their first jobs in Canada on their work visa, or in a more permanent way
He was never afraid to speak his mind, to say what he thought was right and needed to be said. He made beautiful music with his loving wife Madeleine, especially during their time together with the band Tip Splinter. Oftentimes, when Eamonn played a song by Madeleine on his radio show on a Saturday morning, producer Alex Young would lower the volume on the CD and raise up Eamonn's microphone, so that listeners at home could hear him singing along with his wife
His family was very important to him - all one had to do was listen to hear the pride in his voice as he spoke about his devoted wife, Madeleine, and his adoring children, Treasa, now a lawyer, and Rory, now excelling in his first year of Biology at McGill University. Eamonn felt he had come full circle as a father to see Treasa embarking into happily married life with Edward Pendergrast, and Rory setting out into the world as an extremely capable young man
A successful businessman, Eamonn had been the Executive Director of the Ireland Canada Chamber of Commerce since 1993. He graduated from University College Cork with a Bachelor of Commerce degree in 1975, the same year he came to Canada. He worked in marketing for Hallmark Cards for 18 years before starting up his own marketing and communications consulting business, O'Loghlin Communications
Eamonn hosted a weekly Irish radio show and published a national magazine, Irish Connections Canada, formerly the Toronto Irish News. A long time supporter of the Gaelic Athletic Association, Ireland Fund of Canada, and Comhaltas Ceoltoiri Eireann, he was Director of Strategic Partnerships and Corporate Sponsorship at the Canadian National Exhibition, and was the interim President of the newly formed Irish Canadian Immigration Centre
He was honoured as Irish Person of the Year in 2009 for his work on Ceol Agus Craic, the weekly Irish-Canadian radio show he had founded in 1998. He loved traditional Irish music and it was not unusual for a sing-song on the piano to break out whenever he was about. He was also fond of getting back to nature through golfing. He would return for his annual pilgrimage of golfing, travelling and All-Ireland hijinks every September
Eamonn will be remembered for the good work he did in the community, his generous spirit, his love of family, and for being a great boss and leader amongst Canada's Irish community
Family and Friends will be received at Turner and Porter Funeral Home, 4933 Dundas Street West, (between Islington and Kipling Aves.) on Tuesday, January 8th from 2 to 4 pm and from 7 to 9 pm. A Funeral Service will be held at Transfiguration of Our Lord Church, 45 Ludstone Drive in Etobicoke, on Wednesday, January 9th at 10:30am. For those who wish, donations may be made to Canadian Food for Children, Dr. Simonewww.canadianfoodforchildren.net. On-Line condolences may be made through www.turnerporter.ca.
Ar dheis De go raibh a anam dhilis Ni fhicimid a leithead aris 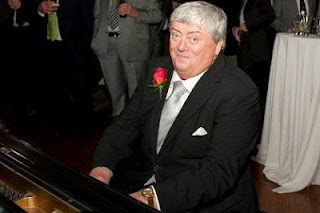